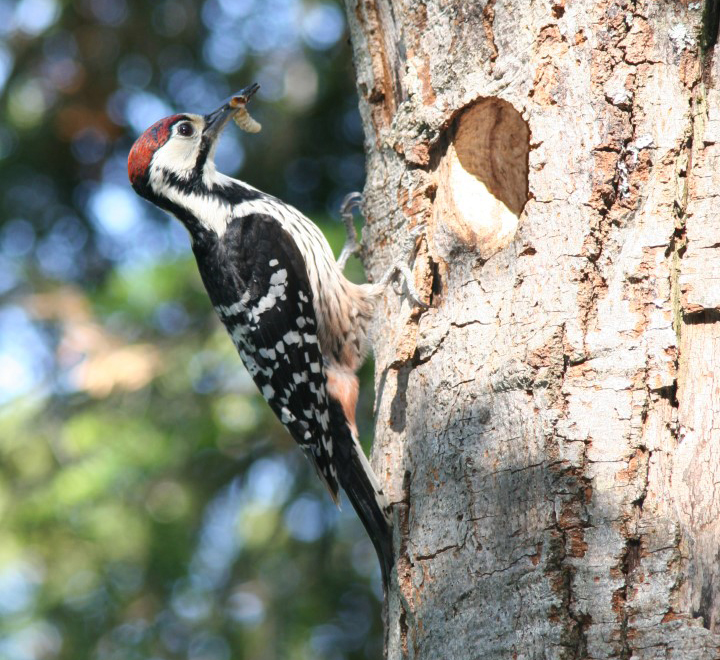 This is a woodpecker you’d be forgiven for not being familiar with! It looks rather like the much commoner Great Spotted Woodpecker (Dendrocopos major), a bird we are all familiar with and which is often present in gardens. The White-backed Woodpecker, on the other hand, is an extremely rare and difficult-to-observe species and is considered Europe’s rarest woodpecker. In Slovenia it inhabits old beech forests, and thus we might call it a “beech specialist”. If we consider that beech forest is the predominant forest type in Slovenia, we would expect the White-backed Woodpecker to be rather common. But it isn’t! For its survival this woodpecker needs large volumes of dead timber, where it can find its food – wood-boring beetle larvae. Thus, it is not surprising that White-backed Woodpeckers can only be found in old, unmanaged forests and forest reserves that support large amounts of dead wood. The population of the White-backed Woodpecker in Slovenia is estimated at only around 100-150 breeding pairs, a number that cannot guarantee the species’ long-term preservation in our region. In Finland and Sweden (two of Europe’s most forested countries) intensive commercial logging has already pushed the species to the brink of extinction. Will Slovenia be the next country to witness the sad demise of the White-backed Woodpecker?

Tengmalm’s Owl is a small species of owl, active only at night and therefore quite difficult to observe. Its main characteristics are its large yellow eyes and a perpetually astonished look! It inhabits upland coniferous forests, where it preys mainly on small mammals. For nesting the Tengmalm’s Owl uses old tree cavities made by woodpeckers. Thus, we will only find it in forests where there are enough large trees with cavities. The lack of such trees in commercial forests is a limiting factor in the distribution of this poorly-known species. The population of the Tengmalm’s Owl in Slovenia is estimated at 450-850 breeding pairs. 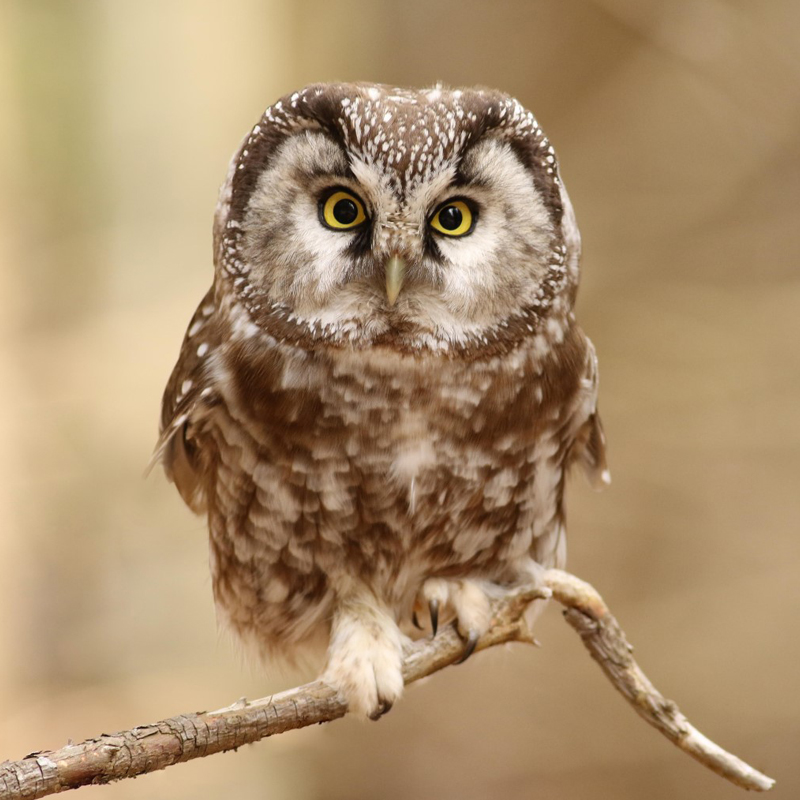 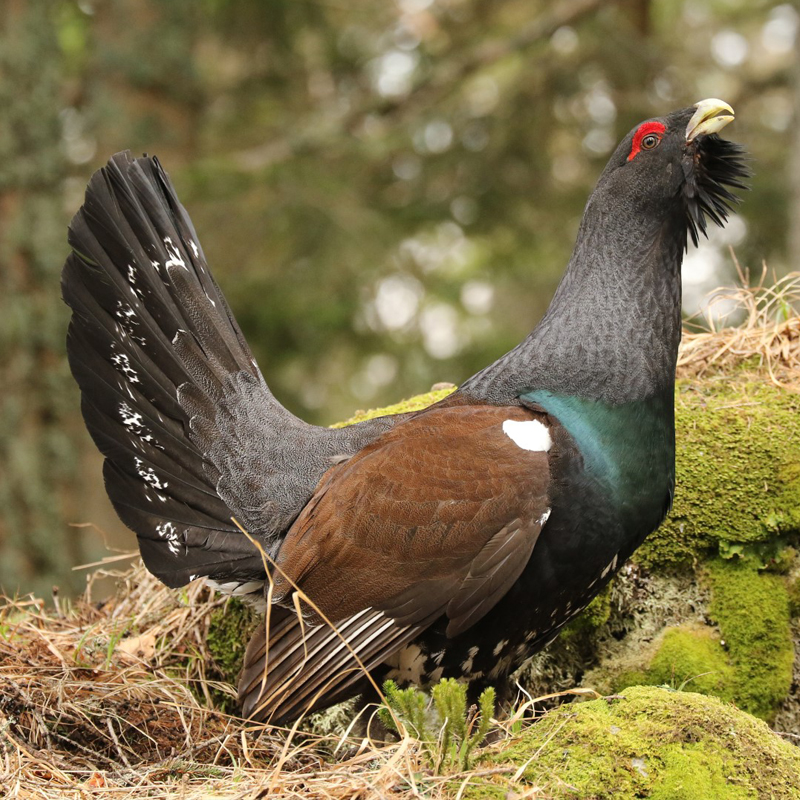 The Capercaillie is our largest forest grouse. It inhabits upland coniferous forests with a rich understorey of berry-bearing plants  such as bilberry, strawberry, and raspberry that represent an important food source for the bird. It is an extremely shy species and highly susceptible to human disturbance of which even a little disturbance in the nesting season can compromise the breeding success. The main threats to Capercaillie in Slovenia include the creation of new forest roads, logging, uncontrolled recreational activities (hiking and the picking of wild fruit …) and direct disturbance on the breeding grounds. Therefore, the species needs protected forest areas that provide it with peace and quiet, especially in the breeding season. In Slovenia the population of Capercaillie is estimated around 550-600 singing males and is declining.

Initially, a male Red-breasted Flycatcher looks rather like a Robin, with its orange-coloured throat and predominantly grey-brown plumage. However this is a much smaller bird, and one that spends most of its time well hidden,  high up in the canopy of broadleaved trees, from where it delivers its melodic song. In Slovenia the Red-breasted Flycatcher is locally common in just a few Alpine valleys. Its main habitat is old, moist beech forests with large amounts of dead wood in which it can find cavities suitable for nesting. The species is under threat due to habitat loss caused by intensive logging. In Slovenia there are only between 100 and 250 breeding pairs. The Red-breasted Flycatcher is one of the few European migrants that spends the winter in India, rather than Africa. 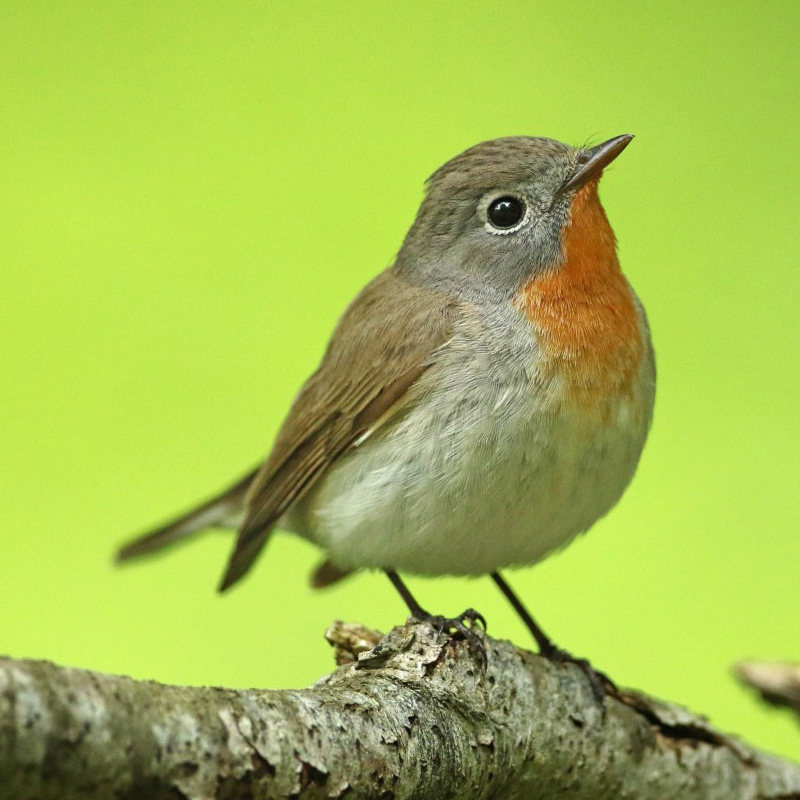 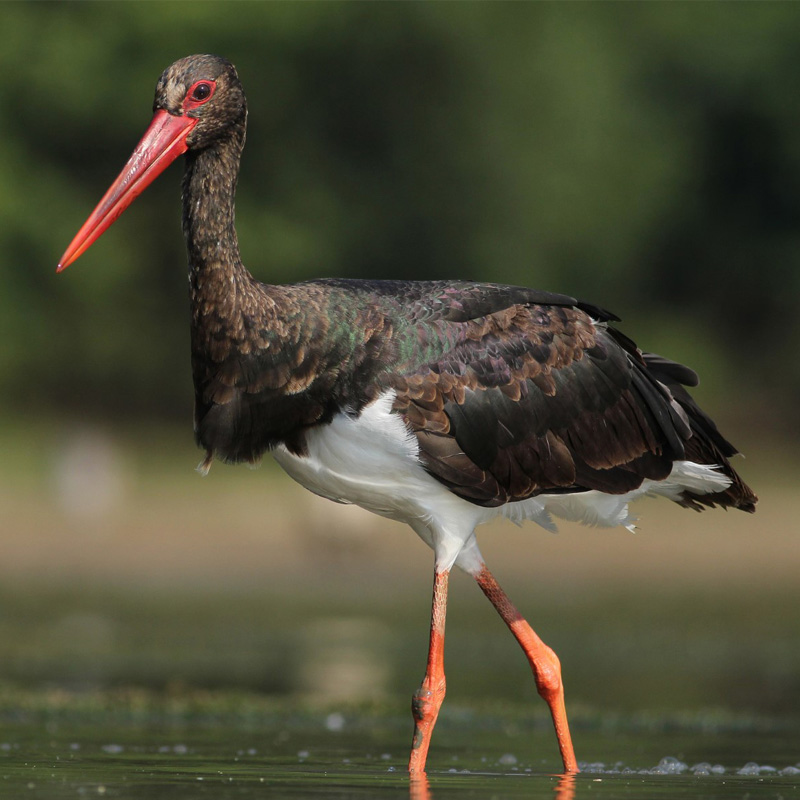 Most people know the charismatic White Stork (Ciconia ciconia), but fewer are familiar with its black relative. With its glossy-black upperparts, white underparts and coral-red legs and bill, the rare and elusive Black Stork lives in wet forests close to streams or other waterbodies. Its main food includes fish, amphibians, and reptiles, sometimes hunting them out in the open on meadows and marshes. It builds a huge nest made of branches, which is placed on a large tree in a quiet corner of the forest. Being rather shy, it tends to avoid the proximity of humans and nests far from potential sources of disturbance. To ensure an efficient conservation of the Black Stork, it is important to preserve quiet forest areas with streams and old trees, as well as minimising human disturbance in the breeding season. The Slovenian population of Black Stork is estimated at around 40-60 pairs.

WE NEED A NATURAL FOREST, YOU CAN CONTRIBUTE TO IT!

You can find out more about which cookies we are using or switch them off in settings.

This website uses cookies so that we can provide you with the best user experience possible. Cookie information is stored in your browser and performs functions such as recognising you when you return to our website and helping our team to understand which sections of the website you find most interesting and useful.

Strictly Necessary Cookie should be enabled at all times so that we can save your preferences for cookie settings.

If you disable this cookie, we will not be able to save your preferences. This means that every time you visit this website you will need to enable or disable cookies again.

This website uses Google Analytics to collect anonymous information such as the number of visitors to the site, and the most popular pages.

Please enable Strictly Necessary Cookies first so that we can save your preferences!